Paul Canoville is probably the most famous victim of racism in British football, having been driven from the beautiful game by the shameful abuse he experienced as Chelsea FC's first black player from his own supporters, team mates and ultimately Chelsea FC itself. An early example of what we are seeing in our stadia here and overseas now, Paul received no support from his club or the PFA and there was no-one around with the clout to stand up to what we would now term Institutional Racism.

Paul's career was over and unsurprisingly he took it hard and struggled to find a way forward. Two bouts of cancer later he set up The Paul Canoville Foundation, working towards educating young people away from racism. Becoming engaged with this demographic led him towards KickOff@3 and he has been a staunch supporter for the last two years. From selfies to encouraging tournament players, presenting prizes to his debut as a photographer, "Canners" has done it all to make his mark, even as coach for a day when we put up a team of professionals, celebrities, volunteers, the KickOff@3 founders and DJ & TipOff@3 guy showed up to support a sister charity in the summer.
This film is a challenging watch and Canners' dignified response to the tough questions asked after watching what others had to say about his career is touching and inspirational.

Copy the link below and type 'Paul Canoville' in the search box to view:
https://mypovonline.com/

We were pleased and proud to be in such talented and altruistic company. The video below shows the nominees describing their work and their passions.  We admire and collaborate with both Lee and Verity, who are considered part of the KickOff@3 family, and are proud to report that Lee Woods, the man responsible for our amazing finale banners was the ultimate winner on the night.

We look forward to working with both Verity and Lee for many years to come.

Kickoff@3 invited by The Sport and Recreation Alliance to present details of our work to senior sports leaders.

Our co-founder, Michael Wallace had the honour of speaking on our ethos and the positive impact of our work at a Sport and Recreation Alliance event in London on 25th September.

He was in distinguished company including Dr Jaqueline Sebire, Assistant Chief Constable of Bedfordshire Police and NPCC Serious Violence Lead and His Royal Highness, The Earl of Wessex.

Kick of @3 are delighted to announce a fundraising event in St Albans on the 8th September 2019.

This is a live music event hosted by Denise Parsons - The Parsons Knows at The White Lion Pub in St Albans ( see flyer).

Everyone is welcome to join us for a fun and entertaining afternoon of live music.

Local musicians will be performing from 3pm and all proceeds will go directly to Kick Off @3 and will help us to move forward with our initiative to support young people.

If you cannot attend but wish to show your support then take a look at our Crowdfunding Page by clicking below.

Kick Off @3 are humbled to be supporting The Josh Hanson Trust at their upcoming fundraising event ( see flyer ).

Listen again to the powerful interview with Tracey and Brooke from The Josh Hanson Trust along with Kick Off Co-Founder Michael Wallace with Wayne Marshall on Colourful Radio.. 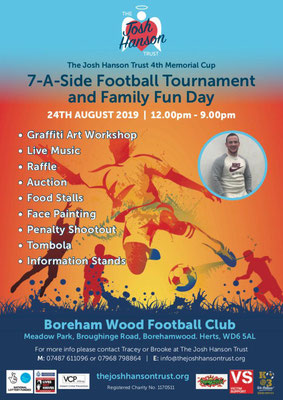 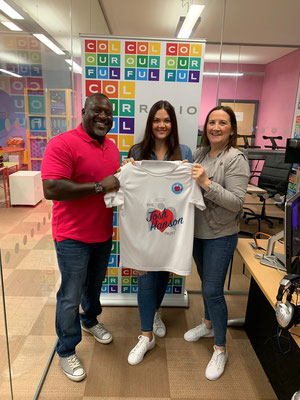 Changing the narrative. Police and youngsters reducing crime together.

This newspaper clipping is from The Voice reporting on one of our first Kickoff@3 charity football tournaments, hosted in Bromley Borough in April 2017. Rob Godwin was the first person to commit to delivering the Kickoff@3 ethos and from the very start Police Leads and young players garnered such positive engagement that match days  influenced a noticable reducation in violent crime. Approximately 200 gathered at Crystal Palace Sports Centre to take part or support our new venture.

The Metropolitan Black Police Assocation were staunch supporters then as now and ACLT still have a high profile presence. As detailed in this article, Leukemia sufferer Delroy Anglin, appealed to the youngsters to volunteer for testing as potential donors. ACLT's profile has grown exponentially over the last 2 years and the donor database is still expanding.

May 2017 brought the first ever KickOff@3 tournaments

Gallery for the 2019 finale

We are very proud of how far this team has come.

Gallery for the 2019 finale

Winners of the Grassroots Project of the Year Award 2019

We are delighted that Kick Off @3 has been nominated for 2 upcoming awards.

Ric Flo for writes U.N.I.T.Y. and produces a video especially for the Kick Off @3 finale

Huge thanks to Ric Flo for writing U.N.I.T.Y. and producing a video especially for the Kick Off @3 finale on 7/7/19!

Ric Flo, is a Rapper, Graphic Designer, Immigrant, Black British Citizen and former foster child. Now, a talented musician forming part of Jungle Brown, Ric wants to give back. He runs Rap Therapy Workshops with foster kids and views it his mission to help misfits feel more at home.

Find out more about Ric & his work here www.aboycalledric.com